In this post, we'll describe – in general terms – the process of verifying a smart contract. Later posts in this series will provide more detail, contrast verification to other automated ways of increasing assurance, and cover other topics.

The pieces that matter for testing

Let's look at what any sort of verification has to work with, starting here:

A smart contract is written in a programming language (commonly Solidity) and then translated into bytecodes. Once a smart contract is reduced to bytecodes, it can be deployed on the blockchain as a contract account at some address. An address is a huge number (for reasons irrelevant to this post.) 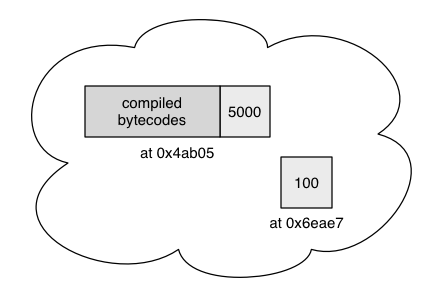 A contract account contains funds, a compiled contract, and other data.

The picture also shows an externally owned account (at 0x6eae7). Such an account contains only funds (100 ether in this case).

A contract begins working after a transaction addressed to it is submitted to the network. Here's a transaction that transfers ether from the submitter's account to another account:

That transaction will be performed by potentially thousands of computers (miners) all executing a copy of the same virtual machine (VM). The VM interprets the transfer function's bytecodes, which will instruct it (in this case) to subtract 4000 ether from 0x4ab05 and add it to 0x6eae7. 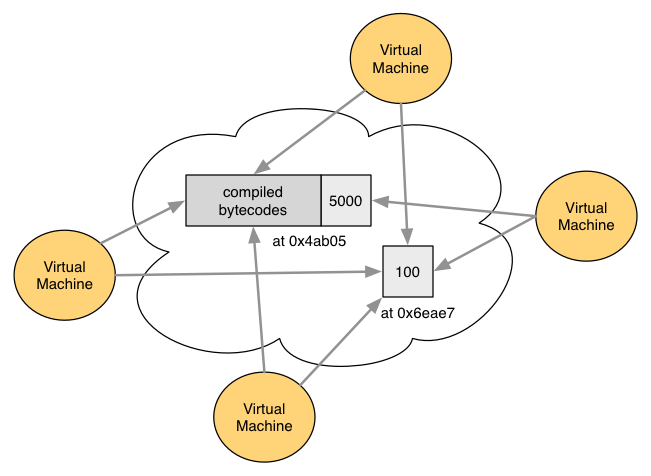 Because all the VMs are processing the same data with the same bytecodes, they'll all produce the same answer.

Our goal is to have great confidence that the contract will behave correctly no matter what value is to be transferred, no matter what the balances of the two accounts, and no matter which account is to receive the value.

There are various ways we could fail to get what we want.

Auditing and testing find bugs, so they increase confidence. We'll leave auditing aside, and compare it to formal verification in a later post. For this post, testing makes for a better comparison.

The tester would turn that into tests by picking specific values for each bullet point. (You can't just "transfer all the ether" – you have to pick a specific number for both the contract and receiver's starting balances, and you need to provide transfer with a specific address.) Running a test means predicting the final balances, making the transfer, and checking if what the contract actually did is the same as what it should have done.

How well this process works depends on how easily the contract can get the right result for the wrong reason. As a simple example not involving smart contracts, suppose you were testing addition and tried two cases: 0, 0 and 2, 2. The code correctly produces 0 and 4, so you conclude it's correct. But what if addition was mistakenly implemented as multiplication? The tests still pass, but you – bad luck! – happened to choose the only two tests that would.

In the case of addition, it'd be hard to actually miss the problem. In other cases – especially error handling – it's much easier. You can think of formal verification as a way to eliminate certain kinds of bad luck.

What is formal verification?

Mathematicians are in the business of looking at things like this: 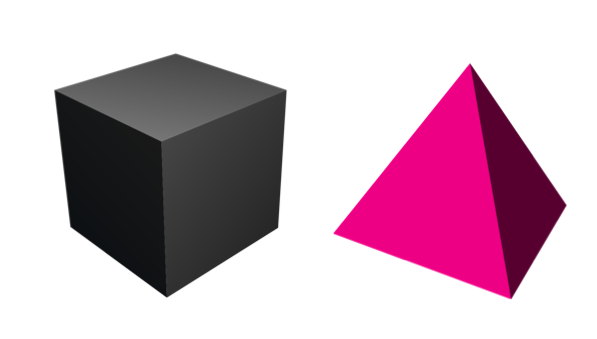 Mathematicians then ask the same question we should have asked with our two addition tests: is this an accident, or is it always true? And they've discovered ways of being really, really confident that something is always true. Those ways are lumped together under "proofs and proof techniques."

(I say "really, really confident" instead of "absolutely sure", because people can still make mistakes. One mistake is failing to notice special cases. For example, the rule above doesn't work for shapes with holes in them. We'll see the relevance of this observation later.)

Given the success of mathematics over the past few thousand years, it's natural to want to apply proof techniques to the question of "does this program always do what it should?"

If we're to prove that a program always does what it should, we have to be precise about what "should" means. That's called the contract's specification: 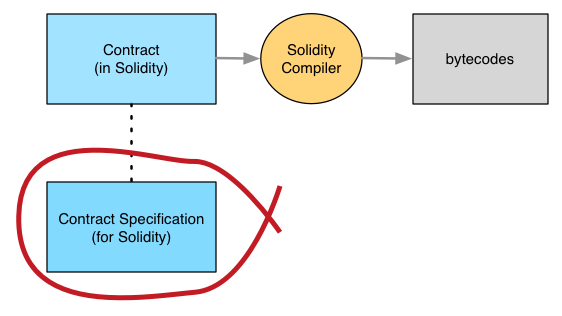 With a specification, a human can take any specific set of starting values (arguments to transfer, balances and addresses of accounts), and a set of ending values, then determine if they match the specification.

This differs from the expected results of a test in that a test works only on a single set of starting values, whereas a specification will work for any set.

Formal verification could compare the Solidity contract against the Solidity specification. Instead, Runtime Verification works with the bytecodes. There are three reasons for that:

Working at the bytecode level has a cost, though. The Solidity specification has to be refined with virtual machine details: 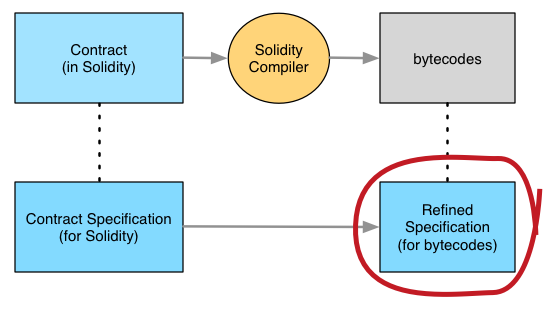 Because of the technical intricacies of the translation, it has to be done manually today. We'll be adding automated support in the future.

In order to check that the contract's bytecodes matches its specification, we need to know what each bytecode does and the bit-level structure of the data it works on. That is, we need a specification (or semantics) for the virtual machine: 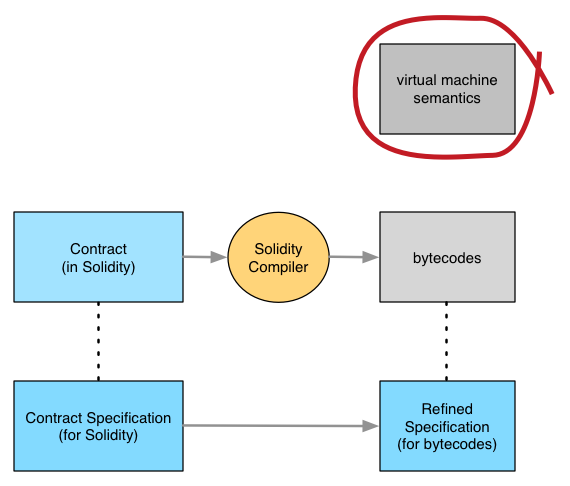 Creating such a semantics is quite labor-intensive, but it only has to be done once for any given virtual machine.

At this point, we can ask an automated theorem prover (in our case a part of the K verification framework) to use the semantics to prove that the compiled contract implements the specification: 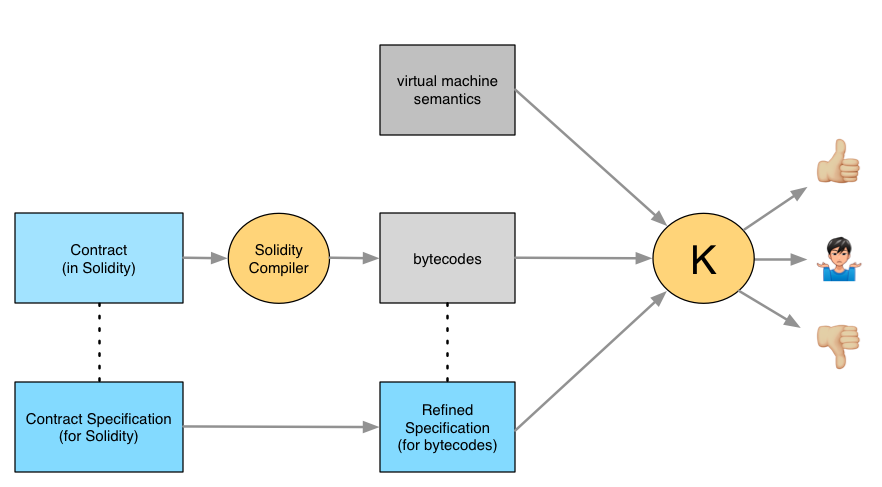 In a perfect world, we'd get one of two messages from the prover:

In our world, the prover sometimes can't do either. It needs hints and other help from a human: 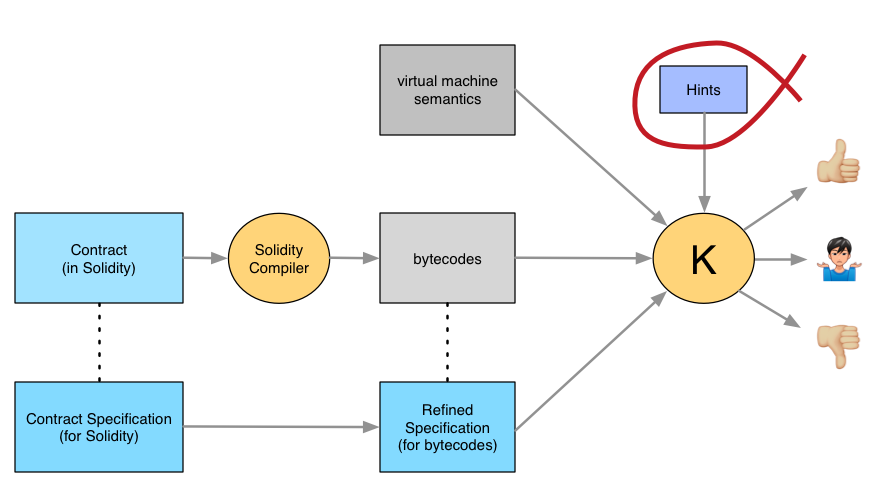 Some financial calculations require raising a number to a power. One contract that failed to prove correct used such a pow function. To understand the problem, consider the following use:

All seems well, but this contract used fixed-point numbers (numbers that only support a fixed number of digits past the decimal point). That means that 0.000000000000000000001 might be too small to fit, in which case it would be rounded to zero.

What's 3/0? In many languages, that's a drastic failure. (The contract wouldn't complete.) In the EVM version of Solidity, it's zero. The result? A contract that should have processed 3000 ether processed none.

That could be bad.

Honesty compels us to admit that it would take several hundred years for this particular contract to fail for this reason. But pow plus fixed-point numbers is an exploit waiting to happen. Somewhere, some contract programmer won't know the danger, or will momentarily forget it, or mistakenly think that small numbers can't get to pow. The justification for formal verification is that the prover won't fail in any of those ways.

When a whole contract is proven, four new documents (two specifications, one VM semantics, and a set of hints) plus one new tool (the prover) have given us confidence beyond what we could have gotten from testing. What risks remain? In particular, how could the worst case happen: we think the compiled bytecodes are correct, we deploy them to the blockchain, and it turns out they weren't correct in some way that makes them vulnerable to an exploit.

In the future, K will be enhanced to generate machine-checkable proofs. Either Runtime Verification or a third party could implement a proof checker to serve as an automated auditor of proofs. A proof checker is much simpler and smaller than K. We estimate its core logic will probably be a few hundred lines of code.

Similarly, if the specification says nothing about logging, any logging behavior will be fine with the prover.

This problem – of translating people's thoughts into symbols a computer can work with – will always be with us.

Take these points away