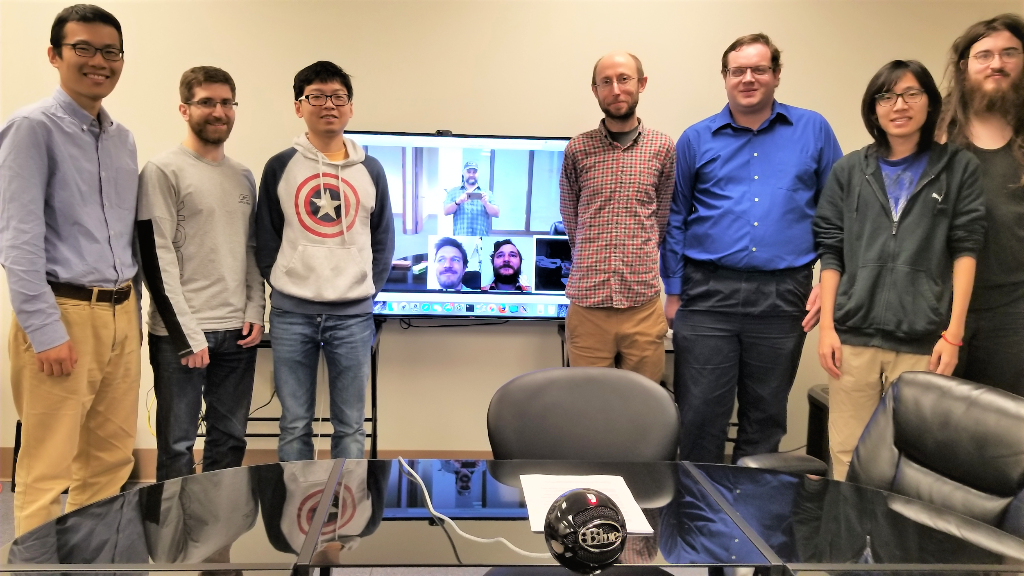 Runtime Verification has been recently awarded a research and development contract by IOHK to design a next generation virtual machine and a universal language framework to be used as core infrastructure for future blockchain technologies. The formal analysis and verification technology employed in this project has been developed and improved over more than 15 years of research and development, both in the Formal System Laboratory (FSL) at the University of Illinois at Urbana-Champaign and at Runtime Verification, with generous funding from organisations including NSF, NASA, DARPA, NSA, Boeing, Microsoft, Toyota, and Denso. It is about time that aircraft grade, software analysis technology used for mission critical software gets deployed to smart contracts, the blockchain and cryptocurrencies. The project will be executed by a team of Runtime Verification experts led by Prof. Rosu, who will work closely with students at the University of Illinois, also funded by IOHK, and with IOHK R&D personnel. IELE and K Team Photo, left to right: Daejun Park (PhD student at UIUC, RV intern); Theodoros Kasampalis (PhD student at UIUC, RV intern); Yi Zhang (PhD student at UIUC, RV intern); Traian Serbanuta (RV; screen, left bottom); Grigore Rosu (RV and UIUC; screen, center, taking the picture); Virgil Serbanuta (RV; screen, right bottom); David Young (RV); Brandon Moore (RV); Yiyi Wang (RV); Dwight Guth (RV). Also Chris Hathhorn (RV), who missed picture.

IELE – A Register-Based Virtual Machine (VM) for the Blockchain

Based on learnings from defining KEVM, our semantics of EVM in K, we will design and define a new VM, which we call IELE (after the Mythological Iele). Unlike the EVM, which is a stack-based machine, IELE will be a register-based machine, like LLVM. It will have an unbounded number of registers and will also support unbounded integers. There are some tricky but manageable aspects with respect to gas calculation, a critical part of the design. Here are the forces that will drive the design of IELE:


Like KEVM, the formal semantics of EVM that we previously defined, validated and evaluated using the K framework, the design of IELE will also be done in a semantics-based style, using K. Together with a fast (LLVM-based) execution backend for K, it is expected that the interpreter obtained automatically from the semantics of IELE will be sufficiently efficient to serve as a reference implementation of IELE.

K as a Universal Language for the Blockchain

Besides EVM, several languages have been given a complete formal semantics in K, including C, Java, and JavaScript. Several others will be given K semantics as part of this project, including IELE itself, Solidity and Plutus. We want to allow all these languages, and possibly more as they are given K semantics, to be used for writing smart contracts. For that, we need to enhance the capabilities and implementation of the K platform itself, which will increase the practicality of all new and existing K semantics. We will implement several performance improvements not yet taken beyond proofs of concept, and develop production-quality implementations of analysis features such as the K symbolic execution engine, the semantics-based compiler (SBC), and the program verifier, which currently have only prototype-quality implementations in the academic K project.

We plan to develop a concrete execution backend to K that will be at least one order of magnitude faster than the current one. The current one is based on translation to OCaml; we plan on translating to LLVM and specializing the pattern matcher to the specific patterns that occur in semantics. We believe it will be possible to execute programs against our KEVM semantics as efficiently as the reference C++ EVM implementation (!). If that will indeed be the case, and we strongly believe it will, then this will mark an unprecedented moment in the history of programming languages, when a language implementation automatically derived from a formal semantics of the language can serve as a realistic implementation of that language. While this was proved as a concept with toy languages, it has never been proven to work with real languages in practice. The K technology has reached a point where this is possible now. And not only to execute programs, or smart contracts, but also to reason about them, because a formal semantics, unlike an interpreter, can also be used for formal verification.

One of the most challenging components of the K framework that will be built in this project is what we call semantics-based compilation. The following picture shows how SBC works:

We have implemented a rough prototype and were able to make it work with a simple imperative language, which we call IMP. Here is an example: 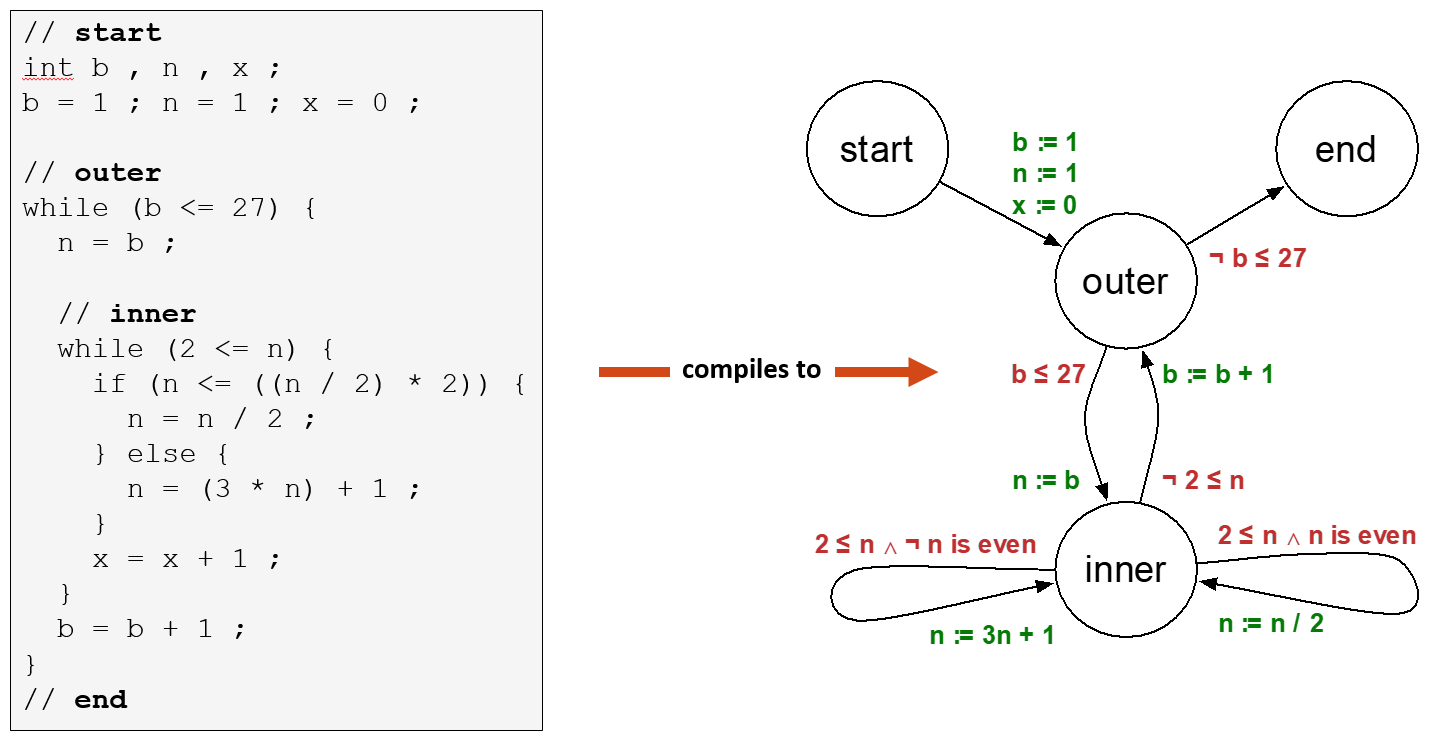 The program to the left is transformed, using the semantics, into a much simpler program that looks like an abstract machine. The four states represent the “instructions” of the new language L’, and the edges are the new semantic rules of L’. As seen, the semantics of the various sequences of instructions has been symbolically summarized, so that the amount of computation that needs to be done at runtime is minimized and everything that can be done statically is hardwired in the new semantics of L’, so all done before the program is executed. Preliminary experiments are encouraging, confirming our strong belief that the resulting SBC programs will execute one order of magnitude, or more, faster:

These improvements to the K framework will not only yield a reasonably efficient prototype of executing smart contracts on IELE, but, more importantly, will give us an approach to write smart contracts in any programming languages that have a formal semantics in K.

Many of the new technologies and tools that will be developed in this project, such as program verifiers and semantics-based compilers, will be useful for any blockchain-based smart contract platform, including Ethereum VM and projects still in development, like Cardano and Tezos.

As a company, we are currently undertaking a number of efforts across the smart contract space. We are also defining the formal semantics of Viper in K, and will soon be announcing smart contract verification services for high-assurance contracts.

In the spirit of open source, community-driven development, we will be holding project discussions on our new K Framework Riot channels at #k:matrix.org.

All software is released under the MIT-like UIUC license, and will be totally free for the community to use as they see fit. We welcome contributions on Git.

We encourage any interested parties to engage us, ask questions, contribute code, or build experience with our tools. We are also always looking for contributors able to work on documentation, efficient install/quickstart process for new developers, and more proof examples. We are hiring, and will be sure to keep an eye open for helpful contributors!

Let's build a better technology for more secure smart contracts for everybody, together!

IOHK is a research and engineering company committed to using peer-to-peer innovations to provide financial services to the three billion people who don’t have them. IOHK builds cryptocurrencies and blockchains for academic institutions, government entities and corporations. IOHK focuses on practical, peer reviewed research to create live protocols, and the technological underpinnings to next-generation cryptocurrencies.

I’m honored and humbled to work with Grigore and his team at Runtime Verification on bringing both the K Framework and semantics based compilation into the cryptocurrency space. These innovations alongside Cardano’s new virtual machine – IELE – will eventually enable developers to write smart contracts in the programming language of their choice and with the tools they have come to know and love. Furthermore, we are extremely excited to explore formal verification of smart contracts with the RV team in order to ensure higher security, performance and reliability as smart contracts begin to pivot from experiments to enterprise and government adoption.